The question comes up sometimes, when people are considering various battery options for electric propulsion on their sailboat.

There is a ton on quality information out there about the pros and cons of Lithium batteries vs their heavier and more expensive predecessor, Lead-Acid batteries.  However, much less is said about the topic when considering batteries for sailboat propulsion. Sailboat electric propulsion is somewhat unique.  In this article, we’re going to cover some basic information about these two battery chemistries.

First, let’s define a few terms so as we talk about cost and performance of batteries, we’ve got clear terms for our context.

Degree of Discharge (DoD):  The amount, in percent (%), that a battery can be safely and reliably be discharged during its use

Discharge Curve:  A graph of Voltage vs Degree of Discharge, for a given battery type

Lifespan:  Number of times the battery can be cycled, from charged to discharged, before its capacity is significantly degraded

Propulsion Batteries:  The batteries used on the boat for propulsion, exclusively.  Typically isolated from other electrical systems on the boat, except for the dedicated charging system(s)

House Batteries:  The batteries used on the boat, for running electrical systems that aren’t part of the propulsion system.  These loads are typically everything from the cabin lighting, refrigerator, bilge pumps, windless, radar, navigation lights, etc.

1 kWh:  One kilowatt-hour is the amount of energy it takes to power a one kilowatt load for one hour (or 1.34 HP used for 1 hour)

Also, when we say Lithium in this article, we’re talking about LiFePO4 batteries (aka LFP).  This chemistry type is used most broadly for electric vehicles, as well as many other applications where safety is essential. While there are other lithium battery chemistries, they are less optimal for electric vehicles or electric vessels, primarily for safety reasons.

Similarly, when we say Lead-Acid, we’ll mean Sealed Lead-Acid (SLA).  Like Lithium, there are various types of Lead-Acid batteries, but fundamentally they work and perform very similarly. 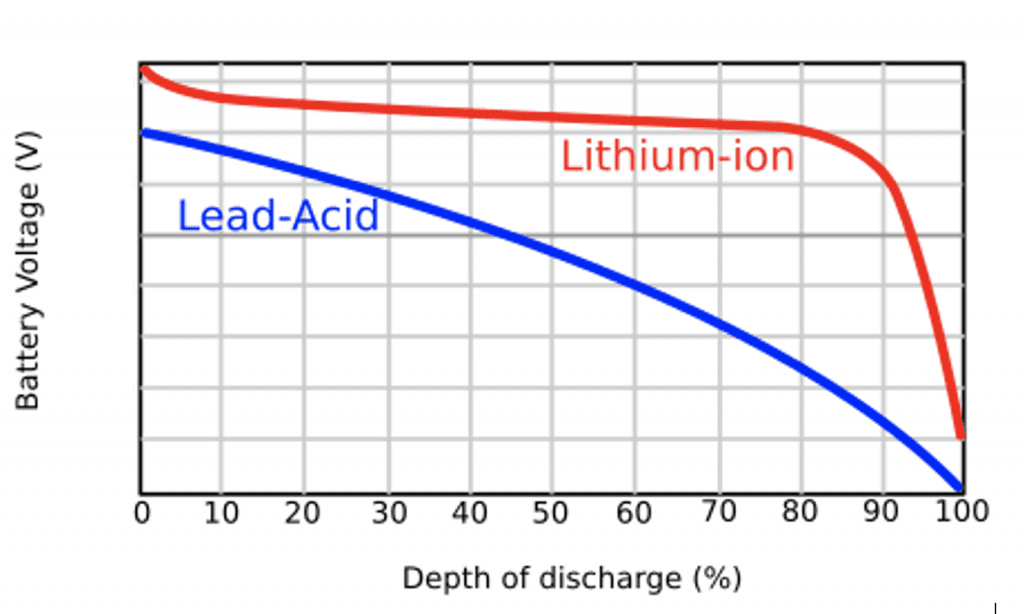 In a blog post I wrote a couple weeks ago (battery-size-and-range-calculations-for-33-electric-sailboat) I talked about the expected range and run-times of a 33’ sailboat, for given battery sizes.  In this article, we’ll compare the available energy, weight, and cost of two 10 kWh battery systems, one using LFP and one using SLA.

From the table above, we can see right away that even though the “installed capacity” of 10 kWh is the same, the “usable capacity” of the Lithium battery is 40% more than the Lead-Acid battery.  Also, the lifespan of the Lithium battery is six (6) times more than the Lead-Acid. In addition to these two major differences, the different in weight between the two chemistries is also very significant, with LFP only weighing about 20% of the SLA batteries.  On a typical cruising sailboat, the added difference of the Lead-Acid bank wouldn’t really be that important. However, securing the batteries into their location is always very important, and this is much easier to do with LFP, since they are 80% lighter.

In addition to these advantages, because LFP batteries are required to have a Battery Management System (BMS) to ensure the batteries are charged, discharged, and balanced within their manufacture specifications, LFP battery banks have more detailed and accurate information available about their status and use history, than a typical SLA installation.

Now, here is where sometimes there is some confusion about the “cost” difference between the two types of batteries.  When someone is browsing around at different batteries, and they’re considering an installation of 10 kWh (for example), they’ll look at some available high quality deep-cycle SLA batteries and calculate a price for the number of them needed for a pack (presumably also including the bus bars, overcurrent-protection, and other sensible things to include in the pack).  They’ll then come up with a price, let’s call it Price_SLA.

Then they’ll do the same thing for an LFP pack (or much more advisable, find one to purchase that is already professionally assembled, includes a properly integrated BMS, and ideally comes with an LFP charger, such as one bundled with our LFP packs).  Let’s call the price of this one Price_LFP.

Then they may think to themselves, Price_SLA < Price_LFP, so Lead-Acid is the cheaper option.  This of course would be ignoring the much lower lifespan, and the lower depth of discharge in Lead-Acid.  They may consider the task of installing 1,100 LBS of lead-acid batteries, and how and where they’d be possibly be mounted.  This alone could be enough to make the whole project seem unfeasible (to say nothing about larger installations with 20 or 30+ kWh packs).

It’s true, the up-front cost of an LFP pack will be greater than the up-front cost of an equivalently sized SLA pack, however as we just noted, due to the much greater usable capacity of LFP and the longer lifespan of LFP, the LFP is a much lower cost battery for electric propulsion. It also performs better and is much easier to install.  With a good BMS, it will also provide an onboard computer with a lot of nice-to-have details about the power system on the boat.

There is much to talk about on this topic, and battery performance is a key consideration when converting to Electric Propulsion.

The main takeaway here is, a Lithium-ion battery pack that is assembled and has a correctly specified and installed BMS, is the way to go, for electric propulsion on a sailboat. 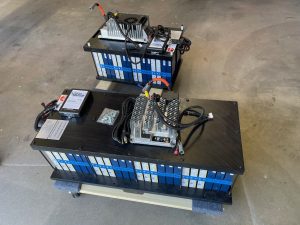 Lastly, the BMS can be (and on Newport packs, are) programmed to limit battery charging to stay below the highest voltage levels shown on the LFP discharge curve.  This is an additional safety feature of the pack, and separate article could be dedicated to this topic alone. The key here though, is that the ability to precisely monitor and control the batteries, voltages, currents, and temperatures, during charging and discharging, is another great feature of an LFP pack.

*NOTE: This article was updated to revise and clarify the calculations of Line 1 and Line 2 of the list at the top of this article, by including the table below.